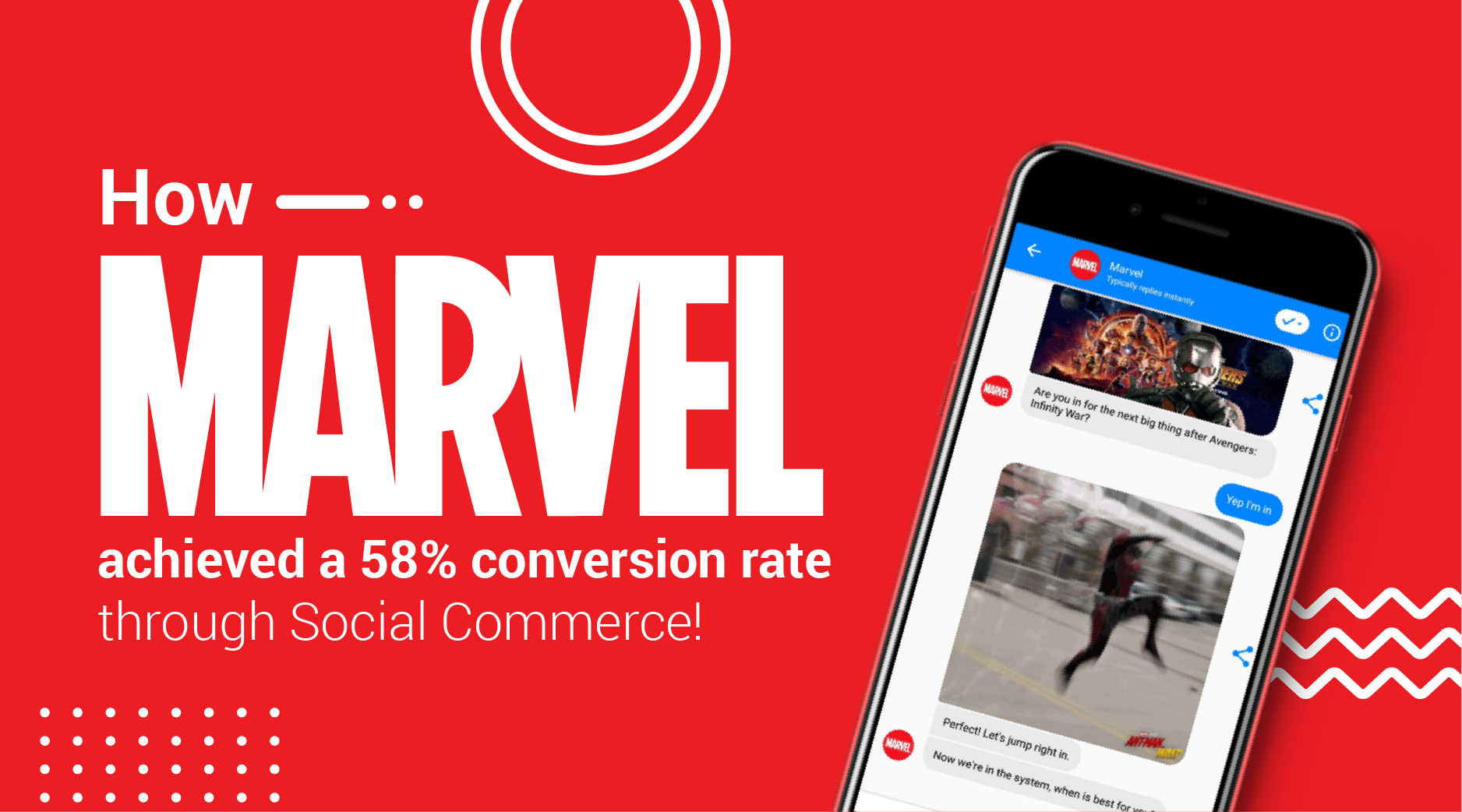 How do the biggest brands in the world stay at the top of their industry?

Is it because their name recognition and reach is so great they’ll always be known?

Does their money just allow them to hire the very best for each position?

Or is it thanks to smart acquisitions of younger, more ambitious, but less wealthy brands?

The truth is it’s a combination of all the above and more.

However, whatever action is taken the goal is always the same.

To push the boundaries of currently known processes. To improve upon the methods other brands use and find the new gaps in the market as they emerge.

Brands who stay at the top are constantly evolving to widen the gap between them and their nearest competitor.

Which is exactly what one of the biggest movie production companies in the world recently achieved thanks to their partnership with jumper.

Thanks to a solid Social Commerce strategy, Marvel saw some incredible conversion rates when promoting both Avengers: Infinity War and Ant-Man and the Wasp.

What Were the Results?

The collaboration extended to the promotion of two of Marvel’s recent movie releases.

Here’s what Marvel managed to achieve in just a few short weeks with jumper:

Ant-Man and the Wasp

Thanks to jumpers insane effectiveness, we were the highest performing campaign they ran across any of their social media channels.

The question is, what exactly did Marvel do, and how can you copy it.

Before we get into how jumper helped increase engagement and sales, let’s take a look at the common method of promotion through social media.

The below is one of the normal Instagram updates Marvel Singapore ran to promote Infinity War.

Relevant video, clear CTA, and timely as it came out 1 day before the movie released.

But whilst the CTA is clear, it’s not exactly sales focused – if you want tickets check out our bio.

This complicates matters as it adds a handful of steps into the purchase journey for users.

In fact, after breaking it down I can see 4 extra steps before the user even gets to the checkout.

Step 3 – Click the bio link to the information page

Step 4 – Find the purchase info on that page

To illustrate the method, I went through it as Marvel are promoting the upcoming Captain Marvel movie.

That method is great for Captain Marvel as, at the time of writing, it’s not yet been released. For general information, it does an adequate job.

But for making sales, it falls far short and we can see two major problems with this process.

The first is that people aren’t heading to Instagram or Facebook to purchase tickets. They’re there to look at pictures related to their interests or catch up on their friends’ lives.

But if they are willing to purchase, you encounter the second issue.

That purchase journey is too long.

Before users can even start choosing their cinema, seats, or entering payment information they have to go through four different steps that span 2 or more channels.

Here’s one of the promotional messages from Marvel Singapore’s Facebook using jumper.

Again they’ve got a highly engaging and eye-catching post.

However, as you can see in the description there’s a comment to drop the hashtag #AvengersSG in the comments.

That hashtag kicks off jumpers automated checkout bot through the user’s DM allowing them to buy tickets in seconds.

Here’s a look at it in action.

It’s effectively cutting the customer journey down to two steps. Engage with the post, complete the checkout.

This campaign for Infinity War was stage one of the overall campaign, and thanks to its simplicity, it absolutely killed it.

Here’s How Marvel Set Up Their First Stage

The core focus with phase one was simplicity.

The great thing about Marvel is that they already have an incredibly huge audience. Their Singapore Facebook page alone has 31,000,000+ likes (which is strange as Singapore’s population is just over 5.5 million!)

Thanks to this huge audience we could focus primarily on organic posts, thus reducing ad spend (if you have a smaller audience, you can easily integrate jumper with your paid ads to increase reach).

For this initial campaign, we kept the idea simple.

We’d use organic posts like the ones you see above, mention that users can buy with a hashtag, and then those users would receive the automated chatbot checkout sequence.

That was pretty much it.

We were testing the water.

The whole campaign was run from jumper’s back end and took little more than an hour to set up.

Before sharing through those networks we personalized the follow-up messages to give it that Marvel flavor.

Then we rolled these shares out over a few weeks during the movie’s initial launch which is where we received the 50% conversion rate.

This initial stage contained nothing too fancy. If we break it down by steps we simply:

When it got really interesting was in the follow-up campaign promoting Ant-Man and the Wasp.

How We Doubled Down on Infinity War’s Engagement

The initial Avenger’s campaign saw us focus on turning organic engagement into sales.

When we focused on Ant-Man and the Wasp, we doubled down on this by also retargeting those who had engaged with the Infinity War campaign.

These people are obviously interested in Marvel movies and are willing and able to purchase through chatbots making them a perfect retargeting audience.

Here’s how we used jumper to retarget those users.

As the focus was through Facebook and Instagram we first set up an audience of those who had engaged with the previous Infinity War campaign.

We jumped into Facebook Business custom audiences and built out an audience of people who had engaged through Messenger during the period of the campaign.

It’s a simple enough task. If you head to your Facebook Business account, then click on all tools > audiences you’ll be able to create a custom audience.

When there, click create audience > custom audience to see the below options. Because we were retargeting based on engagement with a previous campaign, we wanted to start with engagement. 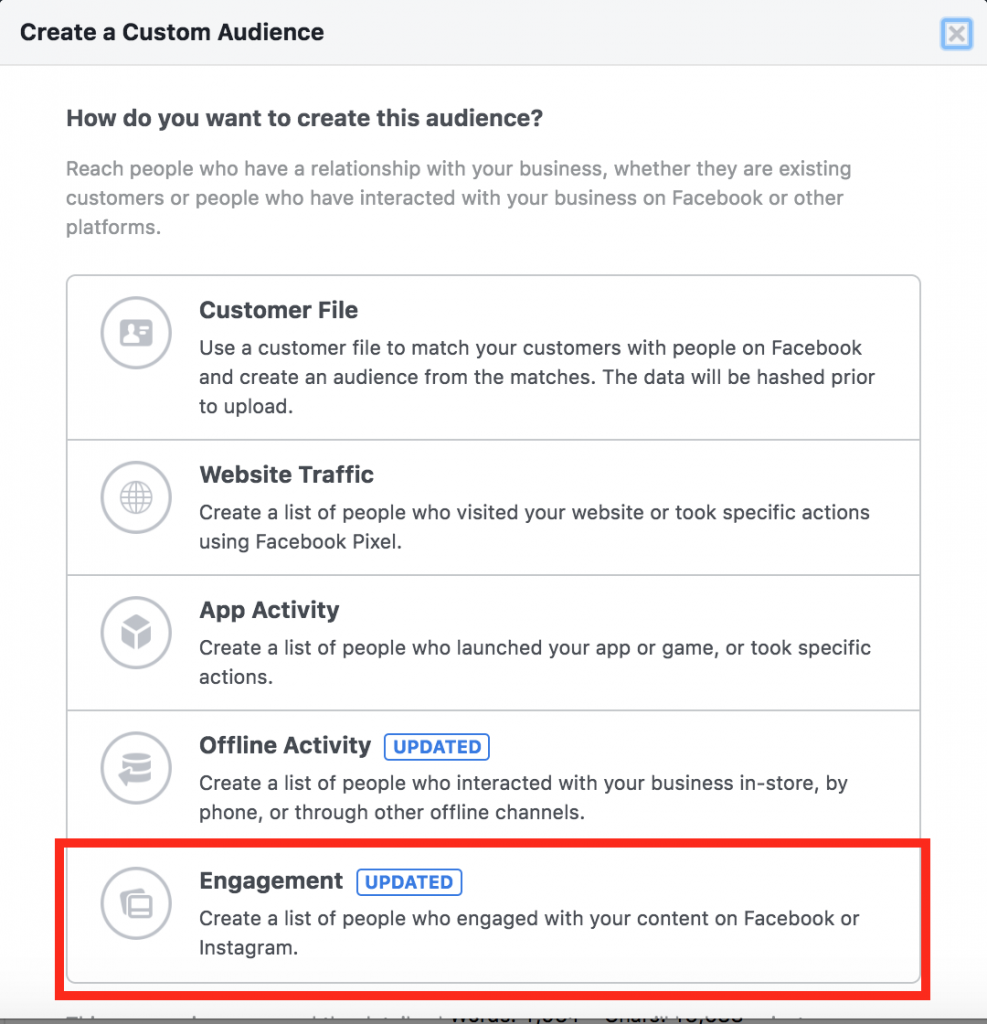 Because the focus was on Facebook and Insta, we focused on people who had engaged with the Marvel business page or Instagram business profile. 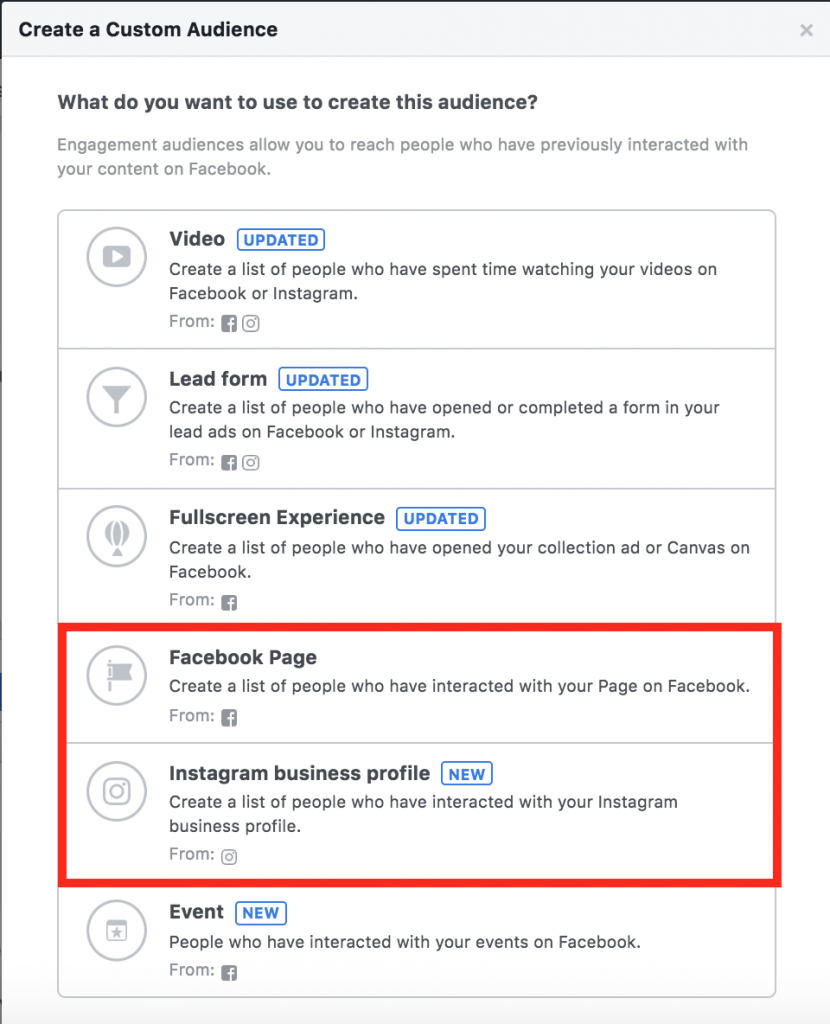 When you click on one, you’ll get your targeted options. We focused the targeting on people who had sent a message to the page/business profile within the last month.

The final step was to target those who engaged during the Infinity War campaign. This built an audience of people who we knew would engage with the chatbot.

These audiences formed 50% of the audience for phase 1 of Ant-Man and the Wasp’s promotion.

The other 50% was made up of organic, first-time users much like the audience used for the initial Infinity War campaign.

This allowed Marvel to reach a brand new audience who had yet to interact with any sort of chatbot as well as capitalize on the existing engagement from the previous campaign.

A double-headed approach of sorts.

However, Marvel wasn’t just looking to improve their targeting. Along with this two-pronged attack, they also improved the quality of the messages they were sending to their users.

The thing people forget with marketing of any sort is that the message you send is just as important (if not more so) than your targeting.

And when it comes to Messenger marketing there’s one key to increasing effectiveness.

Messenger is a channel that’s favored for communications with friends and relatives. It’s not meant for boring, dry corporate communication.

If you check through your message history I’d bet good money it’s full of gifs, fun images, jokes, and slang.

Which is exactly what Marvel included in this second campaign. What made it extra special though was how they used gifs of the upcoming movie.

Not just any gifs either, gifs that had some sort of relation to the action the user was taking and the copy they wrote as the messages.

This second campaign outperformed even the impressive numbers from the Infinity War campaign.

Most likely because we were marketing to a warmer audience and had messages that were more engaging and fun.

It also helps that the messages included not yet seen bits of the movies in gif format.

Neither campaigns are particularly complex which is the real benefit here. If you break them down to their most basic steps you’ll see how simple the whole process was.

That’s pretty much it.

This is what lead to an overall 68% conversion rate and 18X more comments than any other social campaign which went a huge way to increasing reach.

Marvel has made great use of jumper and seized the possibilities Social Commerce provides with two hands.

One step that some users do find a little confusing is how to integrate jumper with your ads. It’s a great way to offer retargeted chatbot experiences and increase the number of first-time users for your campaigns if you’ve a small audience.